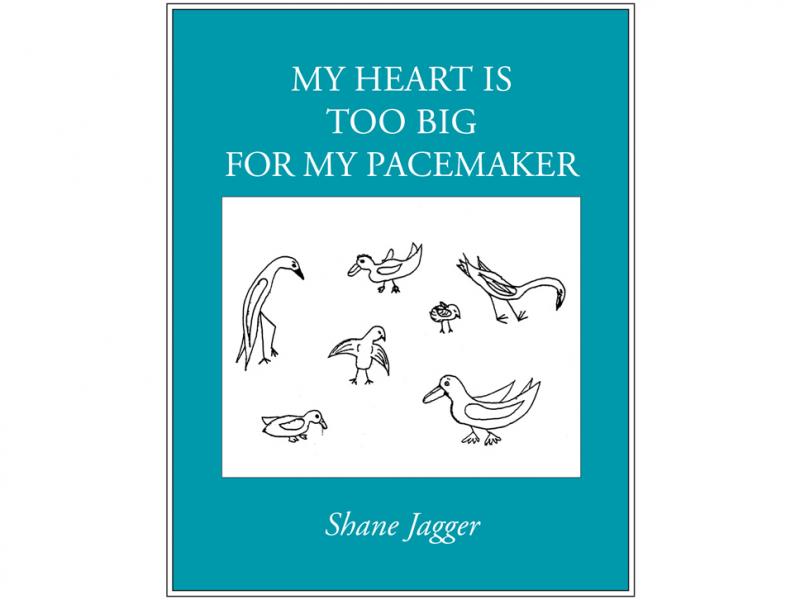 My Heart is too Big for my Pacemaker : poems by Shane Jagger

This little book of poems arrived out of the blue one morning, at a postal address where nothing ever comes except gas bills. I read the first poems to see what was afoot and was caught by these lines: ‘Soon they visit some hearts / though they won’t find them / except by singular / intention and concentration on the giver of hearts’. There was no mistaking the weight of singular intention and concentration, as the seven ‘n’s sounded their gong-like chimes. By the end of the poem, we still don’t know who are ‘they’ of the first line, but we suspect that it might be ourselves – the uncertain ones, the seekers. Probably it is of us that the ‘singular intention’ is required.

Wary of false prophets, we require in return a sense of authenticity. For me, it was the appearance of the angels that decided it. Of these angels, ‘they say some don’t even know / of the existence of humankind’. Angels unaware of us? We have been led to think we created them. But ‘they exist you know / out of the corner of your eye / as perceived by the ill and frail … Oh yes they whisper / clear inspiration like / an idea half-remembered from childhood / they listen to hearts / and without judgement / watch the human failures pass away.’ Watch the human failures pass away? I’m reminded of a peremptory line from one of the Desert Fathers: ‘The whole active life is regarded by God as nothing but leaves on a tree which bears no fruit.’

In another of the poems came this, about death: ‘Each aspect of a person is / taken on a return / to its origin. / Death then / is returning to / that single point / where the request to / live began.’ The idea of death as return is familiar, but ‘each aspect … is taken’ is surprising and ‘the request to live’ is astonishing. The voice of Shane Jagger, Wakil as he is known, acquires authority as he treads untrodden ground.

His angels appealed to me at once, perhaps because the angel Gabriel had caused me problems years ago. He’s the only magical being in the Christmas story – I mean wholly fantastic – big muscular wings, a shining light. When the rule of reason reared its head in my life, it was the angel in the Christmas story that stood out. The rolling away of the stone from the crypt might have been a tall story issuing from the imagination of the disciples, but the angel? It’s like a Harry Potter phoenix. Wakil’s angels are deft, silent, nearly invisible.

As I read the poems I found myself thinking of Rumi, Anatolia’s greatest poet. The association may have been triggered by a reference to the ‘essential friend’, which to an admirer of the Mevlana recalls the amazing Shams of Tabriz, Rumi’s teacher and soulmate. But there was a sense in other poems too of that mixture of the devoted and the unpredictable that is characteristic of Rumi, especially if read in the Coleman Barks translation.

Wakil’s poems are followed by a short life of the author, who ‘found his way to Chisholme House, a school of esoteric education’. The internet reveals that this school was founded by Bulent Rauf, a Turkish mystic. Rauf published books on the sufi sage Ibn Arabi, who in the 13th century AD taught the oneness of being. This pedigree sheds light on Wakil ‘trying to understand / there is only one thing going on / nothing else’ but the poems need no positioning within this or that tradition. ‘Keep sharp and awake,’ the same poem exhorts. They all said that, didn’t they? From Jesus in the garden of Gethsemane to Buddha under the pipal tree.

Back to the poem I started with – visiting the hearts. Free of worry and clean of all clutter ‘these hearts are blessed / with eternity / and extraordinary happenings / will subtly occur’. How I love that ‘subtly’! That whole sentence! It is what I have wanted, all these years.

CalendarOverview of CoursesDiscovering UnityWoodland Retreats
What is it like, doing a course in the 'Foundations of Natural Intelligence'?
Mindfulness
Testimonials