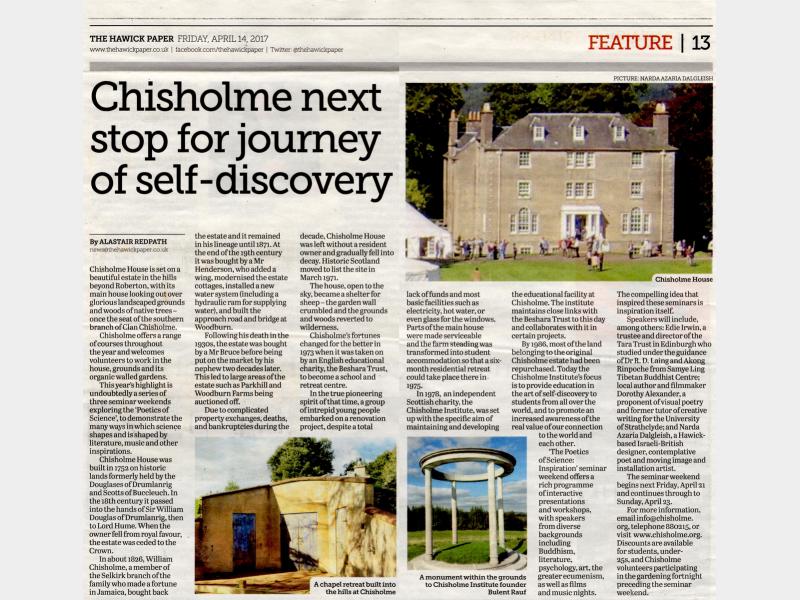 Huge thanks to Alastair Redpath and The Hawick Paper for his excellent article published on 14 April, giving the history of the estate and bringing readers up to date with this month's Poetics of Science seminar weekend.

Chisholme House is set on a beautiful estate in the hills beyond Roberton, an hour and a half from Edinburgh, Newcastle and Carlisle. The main house looks out over glorious landscaped grounds and woods of native trees – once the seat of the southern branch of Clan Chisholme. Chisholme offers a range of courses throughout the year and welcomes volunteers to work in the house, grounds and its organic walled gardens. This year’s highlight is undoubtedly a series of three seminar weekends exploring the Poetics of Science, to demonstrate the many ways in which science shapes and is shaped by literature, music and other inspirations.

Chisholme House was built in 1752 on historic lands formerly held by the Douglases of Drumlanrig and Scotts of Buccleuch. In the 18th century it passed into the hands of Sir William Douglas of Drumlanrig, then to Lord Hume. When the owner fell from royal favour, the estate was ceded to the Crown. In about 1826, William Chisholme, a member of the Selkirk branch of the family who made a fortune in Jamaica, bought back the estate and it remained in his lineage until 1871. At the end of the 19th century it was bought by a Mr Henderson, who added a wing, modernised the estate cottages, installed a new water system (including a hydraulic ram for supplying water), and built the approach road and bridge at Woodburn.

Following his death in the 1930s, the estate was bought by a Mr Bruce before being put on the market by his nephew two decades later. This led to large areas of the estate such as Parkhill and Woodburn Farms being auctioned off. Due to complicated property exchanges, deaths, and bankruptcies during the decade, Chisholme House was left without a resident owner and gradually fell into decay. Historic Scotland moved to list the site in March 1971. The house, open to the sky, became a shelter for sheep - the garden wall crumbled and the grounds and woods reverted to wilderness.

Chisholme’s fortunes changed for the better in 1973 when it was taken on by an English educational charity, The Beshara Trust, to become a school and retreat centre. In the true pioneering spirit of that time, a group of intrepid young people embarked on a renovation project, despite a total lack of funds and most basic facilities such as electricity, hot water, or even glass for the windows. Parts of the main house were made serviceable and the farm steading was transformed into student accommodation so that a six-month residential retreat could take place there in 1975.

In 1978 an independent Scottish charity, the Chisholme Institute, was set up with the specific aim of maintaining and developing the educational facility at Chisholme. The Institute maintains close links with The Beshara Trust to this day and collaborates with it in certain projects. By 1986, most of the land belonging to the original Chisholme estate had been re-purchased. Today the Chisholme Institute's focus is to provide education in the art of self-discovery to students from all over the world, and to promote an increased awareness of the real value of our connection to the world and each other.

The Poetics of Science: Inspiration seminar weekend offers a rich programme of interactive presentations and workshops, with speakers from diverse backgrounds including Buddhism, literature, psychology, art, the greater ecumenism, as well as films and music nights.

The compelling idea that inspired these seminars is inspiration itself. Speakers will include, among others: Edie Irwin, a trustee and director of the Tara Trust in Edinburgh who studied under the guidance of Dr. R.D. Laing and Akong Rinpoche from Samye Ling Tibetan Buddhist Centre; local author and filmmaker Dorothy Alexander, a proponent of visual poetry and former tutor of Creative Writing for the University of Strathclyde; Narda Azaria Dalgleish, a Hawick-based Israeli-British designer, contemplative poet and moving image and installation artist.

The seminar weekend begins on Friday, April 21 and continues through to Sunday, April 23. For more information, email info@chisholme.org, telephone 01450 880215. Discounts are available for students, under 25s, and Chisholme volunteers participating in the Gardening Fortnight preceding the seminar weekend.