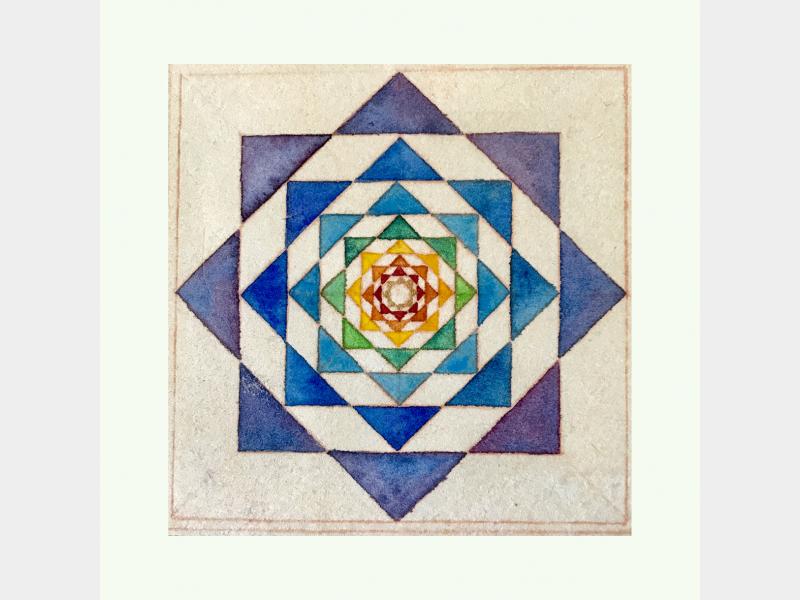 What Is Private About the Private Face?
Rachel Gordin | Friday, 12th October, 2018

It was in 1989 that I first came to the school at Chisholme House. In the exterior, it was an invitation to a wedding celebration of a friend which served as an excuse for my visit. Interiorly, it was in response to a poem by Ibn 'Arabi included in that letter of invitation, and which I perceived as a wild call of my heart to be known and recognised. It was written as a love letter from God, and said:

Ever since then my relationship with the school has had this unique taste of an almost paradoxical combination between the most vast impersonal perspective, and the most intimate secret, sweet as well as piercing, whispered to the heart. On the one hand - the metaphysics of Ibn 'Arabi, telling us that there is only One Unique Being, and that coming under this truth, and letting it be realized in us, can define a new space of unfathomable possibilities; and on the other hand - this secret invitation, as if special to you, that no one else can understand or touch. And "your life" is suddenly perceived as a Moebius Ring, in which the Exterior and the Interior constantly change places. And you yourself seem to be a puzzle in which time is of no consequence and things that happened years ago are seen in a completely new light in the most unexpected way.

Love takes so many forms! There is love for that which is unknowable, unimaginable and entirely other than you; that which is completely pure and cannot be contaminated by my "selfness". Ibn 'Arabi writes about this sort of love: " Wild she is. None can make her his friend". There is love which derives from similarity to anything human. Meister Eckhart writes that he wakes up to pray at night like a mother hearing her baby calling her. There is love that takes shelter under the wing of a Divine Name, which serves a more or less specific quality, like giving praise, or serving beauty or subtlety. This can be private and personal according to the Names each of us is destined to serve, according to our taste and capacity. But there is also the mysterious possibility that Ibn 'Arabi calls "the Private Face of God", which seems to be not private at all. Or, maybe more correctly, it's privacy is not ours but God's. And it is not according to our capacity or value. The Private Face of God seems to be entirely the work of the Wahab - that aspect of God which is of pure Opulence and Richness-Beyond-Need; Which grants gifts because it's in its nature. That aspect which Ibn 'Arabi was advised to take as his sole companion on the Way. The Private Face is not personal, yet it is most unique. There is nothing like it, and apparently no one ever experiences it in the same way. This is apparently what is hinted at when we say about a saint: "Let God sanctify his secret".

It is said that Beshara, or the school at Chisholme House, is not offering a way. The way, says Ibn 'Arabi, is created by the feet that tread it. The only function of the school is to clear the obstacles that might prevent advance. And the invitation to us, as students, is to love the Real as deeply and sincerely as we can, and receive with gratitude whatever comes. Let It find Its unique way into our heart. I have trod, and am still treading, my own path: There are times of pure magic, when that which is given abundantly is almost too much to bear, and there are times of helplessly being exposed to myself (and others) as false and pretending. But all extremes are engulfed by the love and compassion that cover the whole issue. Paraphrasing Simon Veil: 'Thank you, God, for exposing all my faults. Not necessarily in the aim of correcting them, but so that I'll be in the presence of Truth.'

In speaking about the intimacy of the Private Face one can easily fall into pretence, thinking that something was gained, deserved and owned. But love (for truth or beauty) is not like that. I've lately read about a Japanese poetess who is over ninety years old and she writes that when she is sad - she cups in her hands the sunlight that creeps under the door and dips her face in it. As for me, at the present stage of "my life" (closer to the end than the beginning) I pay attention to what it is that people lean on as the meaning of their life, and I feel extremely grateful for what was given to find as meaning by Ibn 'Arabi and the school. And I ask for no better than to be able to say, in the words of my dear friend and companion on the way, shortly before she died (said in a heavy Lancashire accent): "Gee-e-e, We are such ordinary people, all of us, and yet we were given to see a glimpse of our potential".