Out beyond ideas of wrongdoing and rightdoing there is a field.
I'll meet you there.
When the soul lies down in that grass, the world is too full to talk about.

Mevlana Jalaluddin was born in 1207 in what is now North-East Iran, but his family fled the advancing Mongol hordes of Genghis Khan, who by 1220 had devasted Balkh and Samarqand, the cities of Rumi’s childhood. His family settled in Konya, in Anatolia, where Rumi remained for most of his life.

In his late thirties he began a profound transformation as a result of meeting a spiritual master called Shamsuddin of Tabriz. He abandoned his life as a scholar and began the composition of a body of sublime lyric poems, totalling 35,000 lines, and later his mystical masterpiece, the Masnavi.

His unique insight into the human condition makes him one of the greatest spiritual masters of all time. Much of his work has been translated into modern languages and his influence today on modern thought and culture is profound.

The turning of the spheres is perpetually returning – life is returning:
A beautiful movie made about Mevlana Jelaluddin Rumi and Anatolia, from the earliest historical times to the present day.
To watch the film, follow this link...

I must tell you something now...

I must tell you something now or mislead you. And I would rather die than mislead you on this Path that is so beautiful and so hard. A false step can mean death or madness or futility or the destruction of years of hard-won attainment.

What I want to tell you is that all of these words I speak, out of love and inspiration and whatever knowledge God has graced me with, are for the sake of the person who needs words in order to understand. As for the person who understands without words, obviously he or she doesn’t need words at all. In fact, to the one who really understands, the heavens and the earth themselves are ‘words’; after all, they came into being through ‘words’ – the Divine Words ‘Be! And it is.’ If someone can hear a low, subtle whisper, is there any need to shout and scream?

Make everything in you an ear, each atom of your being, and you will hear at every moment what the Source is whispering to you, just to you and for you, without any need for my word or anyone else’s. You are – we all are – the beloved of the Beloved, and in every moment, in every event of your life, the Beloved is whispering to you exactly what you need to hear and know. Who can ever explain this miracle? It simply is. Listen and you will discover it every passing moment. Listen, and your whole life will become a conversation in thought and act between you and Him, directly, wordlessly, now and always.

It was to enjoy this conversation that you and I were created.

'Light upon Light'; Rumi's words put together by Andrew Harvey 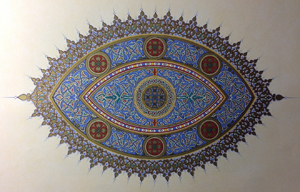 Love Beyond Belief: Opening the eye of the heart in the mirror of religious belief
Alan Williams delivers The Beshara Lecture 2016
at Chisholme House, 19 July 2016
Read more