How could we not have been alive with questioning the mystery and vivacity of life when we were first drawn to him? Then, for each of us the depth of what that life really meant came into full view through the example he demonstrated over the years he was with us.

Before then, we had pages in books to describe this sort of person; on paper a line by line account of how to be, and what real knowledge was like. The experience of meeting someone embodying this depth of wisdom and compassion was profound, and is very rare. None of us who knew him was asked to become somebody we were not already; instead we were encouraged to evolve into that unique individual we had always been, but were a stranger to. In terms of spiritual values we were children waiting to grow up, and meeting him was an immensely enriching and pivotal experience.

In Beylerbeyi, Istanbul, in 1911, the grandson of Ismail Pasha the Khedive (Viceroy) of Egypt, Bulent, was born into a wealthy and privileged aristocratic Ottoman Turkish family, and grew up within earshot of conversations laced with the most refined and esoteric understandings of man’s relationship to God. From his mother’s side he was descended from Aziz Mahmud Hüdayi Efendi, the great 16th century saint and spiritual guide to Sultan Ahmet 1 (who built the Blue Mosque), and on his father’s from the saint Shaban Veli of Kastamonu.

He arrived in the impassioned and impetuous atmosphere of 1960’s London responding to a direct interior order ― in that it was not of his own choosing ― to prepare and guide the movement which within a few years emerged as Beshara. Beshara is premised on the understanding that each person’s real identity is a unique expression of Absolute Being, and that coming to know this is the real purpose of life on earth. In this journey there are no intermediaries between the aspiring individual and God. Years later, when considering a future he would no longer share with us, and knowing the magnitude of what Beshara is in potential, Bulent asked: ‘Will they be big enough for it?’

A man of wisdom, he refused to become anyone’s teacher, though in his company the depth of real friendship was given free reign. He came as a friend and guide and reiterated continually that it is the reality within each person which is the teacher, and that one of the principal aims of being properly established in spiritual education is to find this out for oneself and live it.

Educated privately at home, then at Robert College in Istanbul and going on to Yale and Cornell Universities, he benefited from a western education as well as the private familial background he came from. In 1945 he married his cousin Princess Faiza, the sister of King Farouk of Egypt. Seven years later they lost everything after the coup d’état which brought Nasser to power. In later years when describing the magnificent contents of their house in Alexandria he would say that he had lived with immense wealth and riches and also with considerable poverty, learning the lessons both conditions had to offer.

In London during the late 1960’s and early 70’s, because of his innate ability to answer their questions on reality, many people were drawn to him. They found that along with answers that were generous, clear and tuned to the level of the enquirer, he also directed them to the writings of the 12th century Andalucian saint, Muhyiddin Ibn ‘Arabi. In fact he was related to him spiritually through his own grandfather who is buried at the feet of the saint in his mausoleum in Damascus, in accord with his grandfather’s final wishes. Bulent explained how the writings of Ibn ‘Arabi contain the most elevated explanations of the principle of the unity of being ― that existence is one, a unity, a proper understanding of which truth is the basic foundation for the spiritual development of any person. One of Ibn ‘Arabi’s titles is ‘Shaykh al-Akbar’ - the Greatest Teacher, and although a highly esteemed Muslim saint, his writings are completely universal. They are intellectually attuned to the present era, extending well beyond the confines of any of the great religions to explain to the most subtle degree the real magnitude of the potential which lies within the heart of each one of us, should we wish to realise it.

Bulent divided his time between Chisholme House, the residential school in the Scottish Borders, where he was Consultant, directing the content and form of the courses which were designed for the students who came from across the globe, and Turkey where he would spend the summer months with his second wife Angela Culme-Seymour. It was in Turkey where much of his translation of Ibn ‘Arabi’s seminal work, the Fusus al-Hikam (The Bezels of Wisdom) combined with an extensive Ottoman commentary, took place. This would later be published by The Muhyiddin Ibn 'Arabi Society, of which he was the founder and president, and printed in four volumes by the Oxford University Press.

Although he blended invisibly into the hustle and bustle of the marketplaces of his beloved Istanbul, if you were to walk into a crowded room he would stand out immediately. On meeting him you were struck by his impeccable manners and superb spoken English as well as by that rarest of qualities ― real presence, which for those concerned with the quest for reality is irresistible. When you talked with him he attended with all of himself. All his attention was yours.

He discouraged people from taking photographs of him. In accord with his understanding of reality he said that he wanted his ‘oblivion to be complete’, pointing to the fact that the physical form and one’s memories of it are a veil over a consciousness undergoing constant change and movement. Neither would he allow conventions of deference such as when someone would try to kiss his hand. He discouraged any forms of behaviour towards him which separated or elevated him from those he was with, and despite being very wise always referred to himself as a student, a student of the real.

His company was delightful; he could talk knowledgeably on a wide variety of subjects and had a vivacious and uncontrived sense of humour. Through his cosmopolitan background he had acquired a wide experience of people, their ways and motives. He knew what people were and what drove them. Very compassionate in his dealings with those close to him, he would serve what was required by them essentially, and not necessarily what they wanted from him. So although he loved them, his company could at times be very awe-inspiring. Once, he explained how each moment is the descent of beauty offering two faces. When a person is surrendered to the quality of the moment then beauty is received as itself. But if there is resistance and the place is not receptive to beauty, then what it receives instead is the face of majesty.

No appraisal of Bulent would be complete without mentioning his deep appreciation of good food. He was a superb cook. At Chisholme House each day before the students begin cooking, the ‘Notice to Cooks’ is read aloud, as a reminder of how central good nourishment is for the body as a balance for the nourishment of the soul which is the knowledge of God. He showed students how to prepare and present exquisite dishes that made their way to the great dining table, and many have continued to learn ever since. He demonstrated awareness, attention to detail and above all the acquisition of good taste. For him, education in drawing out the best that individual ingredients are capable of, is analogous to acquiring the best taste, which is drawing out and knowing with certainty that one’s self is not other than the expression of God.

Because of his example and the high esteem in which he is held, what remains in the memory, years afterwards, is immense gratitude for the guidance he brought. He is buried on the highest point of the grounds at Chisholme, but there is no name on his grave. Instead it is called the Monument to Man, in that those who ascend the hill to pay their respects at his graveside meet primarily a mirror to their own transcendent aspiration.

Once, when he asked how would he be remembered by those who knew him, one of those present replied that they would remember him as a simple man. He paused, then replied: ‘Ah, what could there be more simple than the divine complexity?’

He never veered from the premise that union with God was the sole purpose for the existence of man and this certainty coloured all that was accomplished through him. 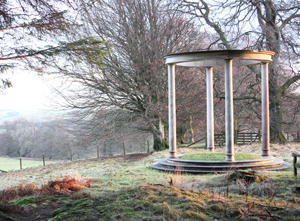 The Monument to Man with its carved inscription:
'They are from Him and to Him they return'

John Brass
John Brass is the author of Fish See Water: A Treatise on Gilding. He studied Fine Art at Canterbury College of Art and then taught painting. In his early twenties he came upon Beshara where he began studying the works of Ibn 'Arabi. He attended both the preliminary and the advanced six-month Residential Retreat Courses at the Beshara School of Intensive Esoteric Education, under the direction of Bulent Rauf, and then joined the staff as a course supervisor. John works as a conservator in gilding and carving for the colleges of Oxford University.